“The David M. Rubenstein Fellowship has been nothing short of transformational for our institution.  From the way in which these phenomenal leaders have expanded our perspectives and insights to the tremendous depth and ingenuity of their individual scholarship, one would be hard pressed to find
a more impactful program at Brookings.”

The David M. Rubenstein Fellowship program brings emerging scholars to Brookings for two-year residencies that ground their research in policy and build their expertise. Throughout their Fellowships, these outstanding scholars participated in public and private events and produced papers, reports, blog posts, and other research outputs. They engaged with key stakeholders through briefings and testimony to inform policymakers and achieve impact on the policy debate.

The experience of the second cohort of Rubenstein Fellows, who completed their tenure at Brookings in 2021, was marked by the COVID-19 pandemic that began just a few months into their time. While the pandemic upended every aspect of life globally, it had a profound effect on the Fellow’s experience and their research. Many of them explored the varied impacts of the pandemic on society in the United States and across the world. Others focused on topics like police reform, artificial intelligence, workforce training, illicit financial flows and corruption, Pakistan and Afghanistan, extremism, defense and security, and climate change. 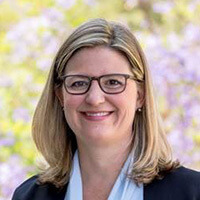 Sarah Reber is an associate professor of public policy at the UCLA Luskin School of Public Affairs. Her research focuses on school desegregation, elementary and secondary education finance policy, and college access. During her Fellowship, she co-authored a series of blogs outlining and exploring the tradeoffs Congress must weigh when choosing how to best support students during the COVID-19 crisis and support the economic recovery, which attracted attention from the staff of Senator Michael Bennet (D-Colo.). She also did important work on how the pandemic is affecting different populations. Her research was featured prominently in the media, including in the Washington Post, ABC News, MarketWatch, Politico, and the Los Angeles Times. At the conclusion of her Fellowship, Sarah will continue her work with Brookings as a nonresident fellow. 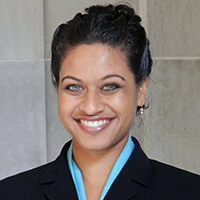 Mallika Thomas is a professor of economics at Cornell University whose research focuses on the causes of persistent wage inequality and the consequences of policy responses. As a Rubenstein Fellow, she published work on unemployment insurance and benefits in the context of the pandemic. Her current work is focused on using job openings data and questions related to worker’s thoughts on the safety of returning to work to provide insight into the pace of the recovery. Following her Fellowship, Mallika will continue the long Brookings tradition of public service by joining the Federal Reserve Bank of Minneapolis, where she has accepted a position of visiting scholar and senior economist in the Opportunity and Inclusive Growth Institute. 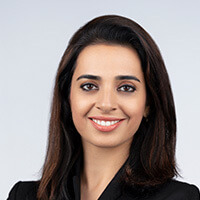 Madiha Afzal is a fellow at the Center for Economic Research in Pakistan and Institute for Economic and Development Alternatives in Pakistan. Her research lies at the intersection of political economy, development, and security, with a focus on Pakistan. She has briefed many policymakers in Washington and around the world and has addressed numerous influential audiences. Her analysis of Pakistan’s domestic and foreign policy has been published in a number of prestigious and high-profile media outlets, including Foreign Affairs and the Washington Post, and she was interviewed by prominent news agencies like BBC, Bloomberg, and the Financial Times. At the conclusion of her Rubenstein Fellowship, Madiha will remain at Brookings as a resident fellow with a principal focus on the Middle East a decade after the 2011 upheaval and China’s expanded ties to transnational criminal activity around the China-Pakistan Economic Corridor. 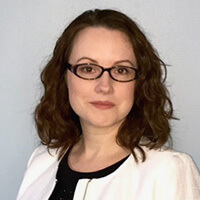 Lindsey Ford focused her research as a Rubenstein Fellow on U.S. defense strategy in the Asia-Pacific region, including U.S. security alliances, military posture, and the regional security architecture. She was a frequent commentator on Asian security and defense issues in outlets including the New York Times, Wall Street Journal, Financial Times, Politico, and Foreign Policy. Lindsey briefed policymakers and other key stakeholders in Washington and around the world on her work, including officials at the U.S. Department of Defense and U.S. Indo-Pacific Command; the Thai, South Korean, and Japanese Embassies and the Taiwan Economic and Cultural Representative Office; and Singapore’s Ministry of Defence, including the Deputy Secretary (Policy). While serving as a Rubenstein Fellow, she was selected as deputy assistant secretary of defense for South and South East Asia, serving as the principal advisor to senior Department of Defense leadership on all policy matters related to the development and implementation of defense strategies and plans for the region. 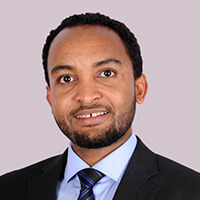 Addisu Lashitew holds teaching and research affiliations with the African Economic Research Consortium in Nairobi and the School of Commerce of Addis Ababa University, Ethiopia. He focused much of his Fellowship on studying the immediate effects and long-term implications of the growing pandemic, collaborating with colleagues from around the world to write papers on the effects of lockdown policies on international trade flows from developing countries and on the impact of the pandemic on the performance of women entrepreneurs around the world. He also wrote extensively on the policy and institutional reforms required to advance the Sustainable Development Goals. Through the Africa Growth Initiative, he provided policy insights to the National Intelligence Council on the implications of disruptive digital technologies for economic growth in Africa. Upon the completion of his Fellowship, Addisu will pursue a career in academia as an assistant professor at the DeGroote School of Business of McMaster University. 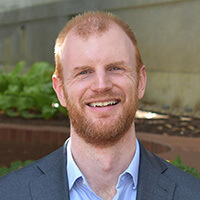 Matthew Collin is a former World Bank economist whose research aims to understand the costs and benefits of policies aimed at reducing illicit financial flows, including money laundering and cross-border tax evasion. As a Rubenstein Fellow, he used leaked data to start unpacking what has been happening in tax havens during a time of great tumult and shifts in policy. Matthew appeared on PRI’s “The World” to discuss his work on corruption and complicity in international banking, explaining the implications of the FinCEN Files leak and scandal. His blog post “Angola and the Money Laundering Paradox” was discussed widely in the anti-money laundering community and was cited in background research for the FACTI Panel, the UN-housed High-Level Panel on International Financial Accountability, Transparency, and Integrity. Upon the completion of his Fellowship, Matt is returning to the World Bank and may retain a non-resident affiliation with Brookings. 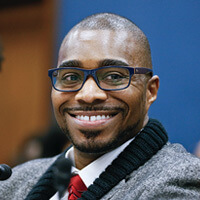 Rashawn Ray is executive director of the Lab for Applied Social Science Research (LASSR) at the University of Maryland. His scholarship informed national conversations on topics such as police reform, white supremacy, reparations, and the racial gap in COVID-19 health outcomes. His work has been cited by top-tier media outlets, including the New York Times, Washington Post, and NPR, among others. He also serves as co-managing editor of Brookings’s How We Rise blog. Rashawn partnered with the American Enterprise Institute to establish the Brookings-AEI working group on criminal justice reform, which published “A better path forward for criminal justice reform.” He assembled a team of national, state, and local policy experts, practitioners, and researchers to better understand the factors driving the racial disparities in COVID-19 health outcomes in Detroit and was one of the first scholars to identify prisons as a key source for COVID-19 community spread. Upon the conclusion of his Fellowship, Rashawn will remain at Brookings as a senior fellow, where he will continue his work on racial inequity and social mobility. 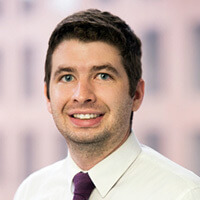 Alex Engler is an adjunct professor of data science and visualization and affiliated scholar at Georgetown’s McCourt School of Public Policy. As a Rubenstein Fellow, he became a go-to resource for journalists and policymakers seeking scholarship and analysis on the implications of artificial intelligence and emerging data technologies on society and governance. He published several popular reports as well as numerous pieces for Brookings’s TechTank and Lawfare blogs. Alex’s research and analysis appeared in the Washington Post, Wall Street Journal, and NPR, among other outlets. He co-led seven events for Brookings’s Track 1.5 dialogue on international AI policy, which included governmental representatives from the US, EU, UK, Canada, Japan, Australia, and Singapore. Alex won the Fulbright-Schuman Innovation Award, a fellowship during which he will help implement the new Master of Data Science for Public Policy at the Hertie School in Berlin and then study the EU’s artificial intelligence regulation at the Center for European Policy Studies in Brussels. He will then return to Brookings as a fellow to continue his work on AI oversight and international AI governance. 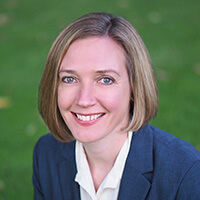 Annelies Goger is an economic geographer focused on developing innovative policy solutions to address rising inequality and increase access to economic opportunity. During her Fellowship, she provided expert advice to Members of Congress and House committees on a pilot program for the Supplemental Nutrition Assistance Program and on Workforce Innovation and Opportunity Act reauthorization. She also made recommendations to government leadership regarding workforce and economic development policy in response to the COVID-19 recession and Trade Adjustment Assistance and has advised Senators on quality assurance for online training, employer engagement, WIOA reauthorization, unemployment insurance, work share, and wage records. She participated in several expert panels, networks, and task forces organized by government, academia, and the private sector. She also engaged with industry and civil society groups, presenting research on how automation and AI are affecting employer skill needs and talent pipelines. Upon the completion of her Fellowship, Annelies will remain at Brookings as a fellow in Brookings Metro. 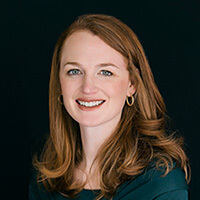 Molly Kinder is a former nonresident senior fellow at New America and director of research for its Work, Workers & Technology initiative. Her “Windfall Profits” report was hugely influential, leading many of the least generous large retail companies to announce new hazard pay bonuses and informing hazard pay mandates passed in many of the largest cities on the west coast. “Windfall Profits” was covered by many major news outlets, including the New York Times, Washington Post, Wall Street Journal, BBC, CNN, NBC, CBS, CNBC, USA Today, The Hill, The Guardian, Business Insider, Time Magazine, NYMag, and Yahoo Finance, as well as various local newspapers across the country. Since the start of the Biden administration, staff from the White House NEC, Council on Economic Advisers, and the Vice President’s office have reached out about her work on essential workers to inform briefings to the Vice President and public remarks, and she continues to make recommendation for state and local governments to leverage federal aid for hazard pay. Upon completion of her Fellowship, Molly will remain at Brookings as a fellow in Brookings Metro.

Brookings is pleased to welcome the third class of the David M. Rubenstein Fellows for two-year residencies. The ten new Fellows will conduct research and analysis, bringing fresh, diverse thinking to the Institution and advancing innovative scholarship on critical policy issues.

Learn more about the David M. Rubenstein Fellows at
brookings.edu/david-m-rubenstein-fellowship-program/