Over the past year, as the COVID-19 pandemic raged on and the United States looked for ways to reopen the economy while maintaining public health and safety, Economic Studies scholars drew on their expertise to provide sound advice to policymakers. Economic Studies research helped federal and state leaders examine the continuing impact of the pandemic on the labor market and disparities in socio-economic outcomes, and how social insurance and emergency programs were aiding the economic recovery. Economic Studies scholars also continued their vital work on climate policy, the health care system, social inequality, monetary and fiscal policy—including retirement and taxes—and financial stability.

Learn more about the simulations

The TRACE-STL project provided critical guidance for state and local policymakers on how to effectively contain the local spread of COVID-19 in the face of continuing uncertainty about virus variants and vaccine uptake. Building on previous work at the national level and working closely with the St. Louis Department of Health, scholars in the Center on Social Dynamics and Policy (CSDP) developed a highly realistic simulation framework to assist the department in developing robust containment policies and practices to minimize cases of COVID-19 among the metro area’s three million residents. This work demonstrates the value of using an agent-based computational modeling approach to assist policymakers in developing highly customized policies, while managing the substantial uncertainty that remains part of managing both the COVID-19 pandemic and pandemics to come.

The results of the work were incorporated into practice on the ground and featured in a public outreach campaign by the health department. Building on the successful collaboration with St. Louis, Senior Fellow and CSDP Director Ross Hammond also presented the approach to the San Francisco Department of Health, the Utah Department of Health, a UK cabinet office, and advisors to the French government, among others. Additionally, he gave an invited briefing on the TRACE model to the Bipartisan Working Group caucus of the U.S. Congress, focusing on contact tracing and testing capacity related to COVID-19. CSDP scholars are continuing this work with particular emphasis on the endgame for the current pandemic and on better preparedness for rapid response to future pandemics, which pose an increasing threat. 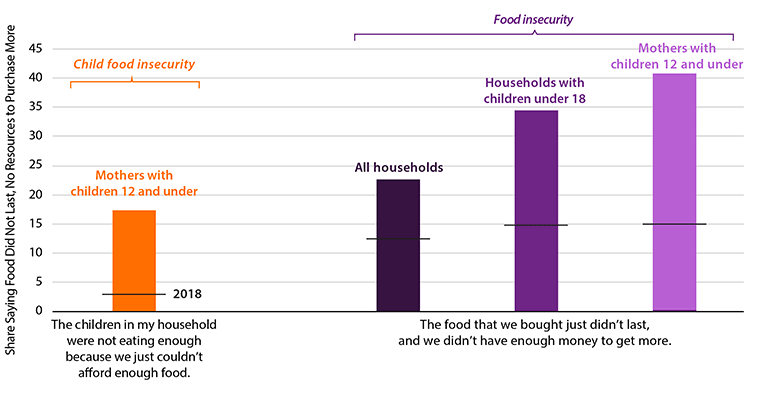 Data shows the high levels of food insecurity observed in the COVID Impact Survey and in the Survey of Mothers with Young Children.

Two in five households with mothers with
children 12 and under were food insecure.

The COVID-19 pandemic increased food insecurity in the United States, particularly among families with children. The Hamilton Project played a critical role in ensuring policymakers focused on this issue and provided guidance and technical assistance regarding the federal response. Hamilton Project Fellow Lauren Bauer has led these efforts by providing timely analysis and expertise, including tracking food insecurity in the U.S. and evaluating the effects of nutrition assistance programs. Outreach efforts to disseminate this work included publications; stakeholder engagement; several briefings for policymakers and reporters with partners including Share our Strength/No Kid Hungry and the Urban Institute; testimony on the future of the Supplemental Nutrition Assistance Program (SNAP) before the U.S. House of Representatives Agriculture Subcommittee on Nutrition, Oversight, and Department Operations; and dozens of interviews with reporters that generated extensive coverage in leading outlets. The Hamilton Project’s work influenced the federal response on nutrition assistance including the collection of national food insecurity data, the authorization and extension of Pandemic EBT, the maximum benefit increase to SNAP, the suspension of SNAP work requirements, the dissolution of the prior administration’s rulemaking, and the current administration’s executive actions.

The Future of SNAP

Helping Coal-Reliant Communities in the Fight Against Climate Change

As the Biden administration and the world grapple with how best to tackle climate change, former Senior Fellow Adele Morris’s work has helped show how a small fraction of revenue from a carbon price could fund billions of dollars annually in local investments and deliver direct assistance to coal industry workers. If the United States undertakes actions to address the risks of climate change, the use of coal in the power sector will decline rapidly, presenting major burdens on the workers employed by the industry and their communities. Over the past year, Morris spoke with dozens of Congressional members and staff about how they can provide assistance for coal-reliant communities in carbon pricing legislation. Prior to the pandemic, Morris travelled across the U.S. to meet directly with elected officials and local stakeholders in coal communities to discuss options and potential redistributive outcomes of a carbon tax. The risks from the financial decline of coal-reliant communities are not limited to the United States, so Morris has also engaged extensively with stakeholders in other countries to disseminate her ideas more broadly. 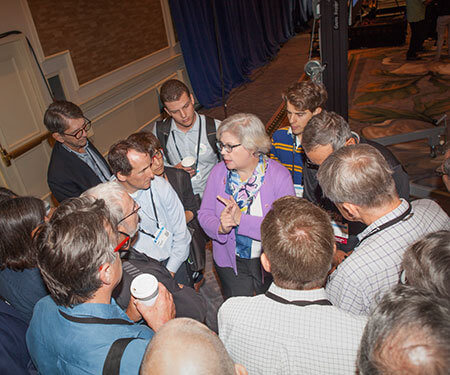 High health care costs are a major concern for many U.S. families. One source of these costs was surprise out-of-network billing, where consumers received very large bills for out-of-network care, even though they did not intentionally select an out-of-network health care provider. The USC-Brookings Schaeffer Initiative on Health Policy began working to bring awareness to this issue in 2016, starting with an initial white paper outlining the problem and its ramifications.

The Initiative’s scholars continued this work over the next four years. Through their sophisticated analysis, the Schaeffer Initiative created an evidence-based playbook to help federal and state policymakers tackle surprise billing—educating them on its causes, showing that the practice was driving up premiums, and warning of the dangers of basing arbitration decisions on provider charges, as New York and New Jersey had done in their attempts at reform. The team also analyzed each Congressional proposal on the topic and made suggestions to improve them, leading to eleven Hill briefings and Congressional testimony; they also regularly provided technical assistance to policymakers. The No Surprises Act, enacted in late 2020, steers clear of the inflationary solutions their work warned against and incorporates many provisions to improve the law identified by their analysis.

On its 50th anniversary, scholars, journalists, and policymakers reflect on the history and impact of the Brookings Papers on Economic Activity

In August 2020, the Federal Reserve released a new statement of its longer-term goals, which described how the Federal Open Market Committee (FOMC) will change its approach to achieving its dual mandate of price stability and maximum employment. After a comprehensive review of its existing monetary policy framework, the update was made to reflect changes in the economy over the past decade and how policymakers are taking these changes into account in conducting monetary policy.

Over the past several years, the Economic Studies program, and the Brookings Papers on Economic Activity (BPEA) in particular, have published a number of papers that informed the FOMC’s thinking. The idea for a regular review of the monetary policy framework was promoted in a fall 2018 BPEA paper by Boston Fed President Eric S. Rosengren and colleagues, and the formal review began soon after. In 2017, Distinguished Fellow in Residence Ben Bernanke proposed temporary price-level targeting—which influenced the flexible average inflation targeting that has become part of the new framework. Additionally, several other BPEA and Economic Studies papers explored alternatives to the Federal Reserve’s two percent inflation target and how to conduct monetary policy in a low-interest, low-inflation environment. Federal Reserve Chair Jerome Powell’s speech announcing the change referenced several Brookings Papers on Economic Activity, including a paper by Vice President and Director of Economic Studies Stephanie Aaronson.

Learn more about Economic Studies at
brookings.edu/program/economic-studies/
and follow @BrookingsEcon