As the country and world increasingly grappled with the enormous impacts of the COVID-19 pandemic, interest in the Brookings Metro’s valuable thought leadership and analysis of local and state economies surged. The pandemic urged scholars to swiftly shift gears to meet the moment by not only helping local leaders mitigate the devastating effects of the COVID-19 recession on their workers and small businesses, but also help rebuild a more resilient economy in its wake. The nation’s increased attention to racial injustice provided opportunities for Brookings Metro’s scholars to showcase the pervasiveness of policy impacts on racial inequities. Now, as Brookings Metro commemorates its 25th anniversary, the challenges and opportunities facing cities have drastically evolved, fueling the exchange between the program’s pathbreaking ideas and the delivery mechanism for its impact and influence. 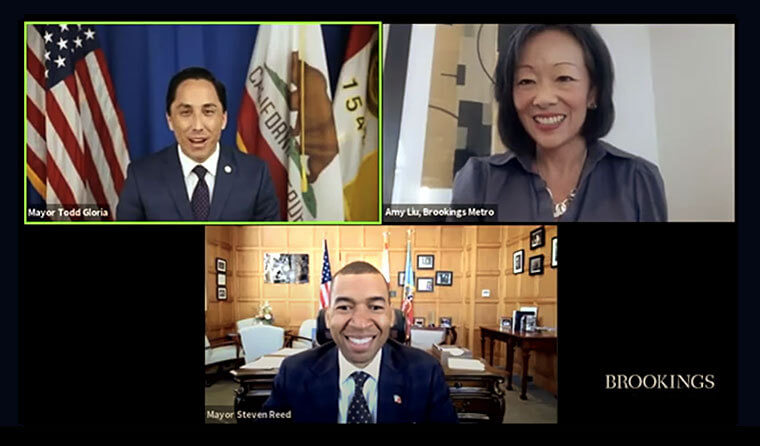 Starting in early 2020, Brookings Metro began to inform and enable local action in response to the COVID-19 economic crisis and by summer was responding to exigencies facing regional economies with a range of products and efforts. Brookings Metro developed the publicly accessible COVID-19 Metro Recovery Watch to track data on how the crisis is impacting metropolitan economies and share policy ideas and best practices for local and state leaders to promote an inclusive recovery.

These efforts included the Metro Recovery Index, which tracks the performance of 192 metropolitan areas around the country on indicators covering the labor market, real estate market, and levels of economic activity. Another tool, the Spotlight on Local Recovery Efforts, provides detailed case studies of novel or promising approaches, practices, and policies that can set the stage for a more equitable COVID-19 economic recovery and longer-run inclusive growth. The Metro Recovery Index and Spotlights series in turn helped inform Brookings Metro’s Actionable Ideas for Recovery in American Cities, which includes a series of policy ideas aimed at providing local leaders in government, business, nonprofits, and higher education a recovery framework through a set of nine concrete ideas for rebuilding better. While achieving a more prosperous and equitable future requires the actions of many individuals, organizations, and policymakers (not least, funding from the federal government to forestall severe cuts in state and local services), this series offers practical steps that local leaders can take as a down payment toward broader reform. 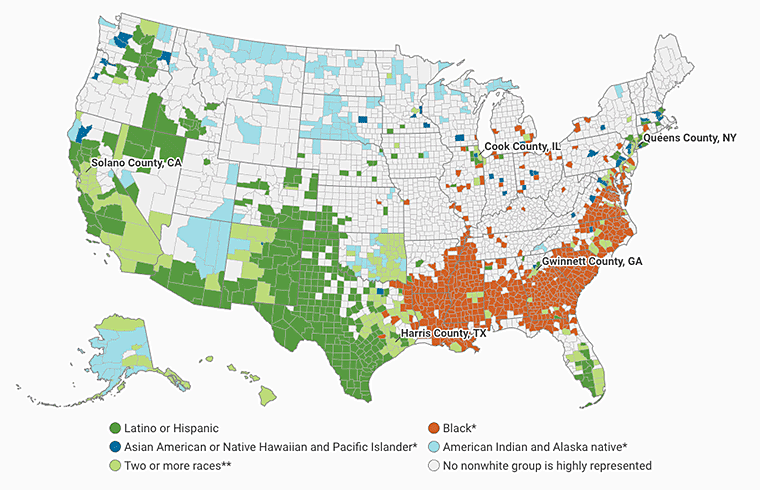 Mapping America’s diversity with the 2020 census

Persistent discrimination in the housing market has deep ramifications for Black households’ ability to build wealth and achieve the American dream. While homes in metropolitan areas across the country have skyrocketed in value, homeowners in disproportionately Black and Latino or Hispanic neighborhoods are gaining wealth at only half the rate of homeowners in disproportionately white neighborhoods. In February 2021, Brookings Metro Senior Fellow Andre M. Perry testified before the House Committee on Financial Services’ Subcommittee on Oversight and Investigations during a hearing titled How Invidious Discrimination Works and Hurts: An Examination of Lending Discrimination and Its Long-term Economic Impacts on Borrowers of Color. Perry was vocal in asserting that while overt discrimination in U.S. housing policy has been outlawed, systemic racism in the housing ecosystem continues to impact Black families, both through the actions of individual appraisers as well as the broader industry’s devaluation of majority-Black communities.

Housing policy is not the only area that privileges white people by rigging processes and implementation structures that widen racial disparities across numerous quality-of-life indicators. Among his first acts in office, President Biden signed an Executive Order on Advancing Racial Equity and Support for Underserved Communities through the Federal Government. Perry’s work aims to help legislators understand how to achieve equity through a robust measurement methodology. He argues for a scoring system that holds federal policymakers “accountable to basic democratic principles such as racial inclusion.” Perry’s conversations with Representative Gregory W. Meeks (D-N.Y.) led to the introduction of the Social and Economic Equity Promotion Act, a bill to require analyses from the Congressional Budget Office of how legislative proposals would impact historically underserved communities, including communities of color and others that have experienced longstanding social and economic inequality.

Brookings Metro published a data-driven snapshot of the growth and geography of the emerging artificial intelligence (AI) economy in the United States.

Learn more about the AI economy

Launched in 2018, the Brookings Network for Economic Inclusion (BNEI) serves as Brookings Metro’s practitioner-driven network, with a primary emphasis on how to organize the complex work of inclusive economic growth, including the language and dynamics around race and racism. By 2020, BNEI had grown to include representatives from more than a dozen cities and is now relaunching with an expansive vision for more participation across cities and sectors. Network participants have exhibited strong demand for learning and connection, enthusiasm for new peer exchanges, and strong interest in expanding collaborations with their economic development peers. Over the last year, BNEI served as a rapid response focus group to discuss challenges related to the COVID-19 pandemic, where members and scholars participated in more than a dozen virtual convenings and webinars to discuss policy ideas, share best practices, and partner on new and innovative research.

Developing a Vision, Structure, and Plan for Inclusive Growth in Birmingham, Alabama

In 2019, Birmingham Mayor Randall Woodfin and Birmingham-based business leaders reached out to Brookings Metro to help support an evidence-based, cross-sector economic development vision for the city of Birmingham and surrounding communities. Over the course of several months, Brookings Metro experts conducted a market assessment, engaged a new generation of leaders, and offered strategic advice for the region, which led to the creation of a new public-private sector initiative, Prosper Birmingham. Launched in 2020, Prosper Birmingham is a dynamic coalition of community, civic, and business leaders committed to creating a more vibrant, racially and gender inclusive economy. Prosper Birmingham has already made key investments towards improving the Black business ecosystem, helping young adults access careers and college, and nurturing a new health tech initiatives that will bring together entrepreneurs, university researchers, and community groups in the development of population health solutions that can generate new jobs and opportunities locally.

In the wake of the murder of George Floyd, Mayor Woodfin, University of Alabama at Birmingham President Ray L. Watts, and a group of Birmingham CEOs announced a joint commitment to expand supplier diversity, including making sure that investments in local Black businesses are tracked and made transparent. The mayor’s office credited engagement with Brookings Metro for inspiration, including helping create the right conditions to set a credible public-private partnership table that made such an initiative possible. 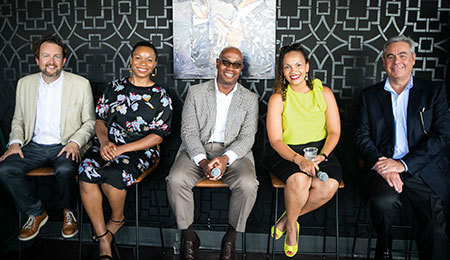 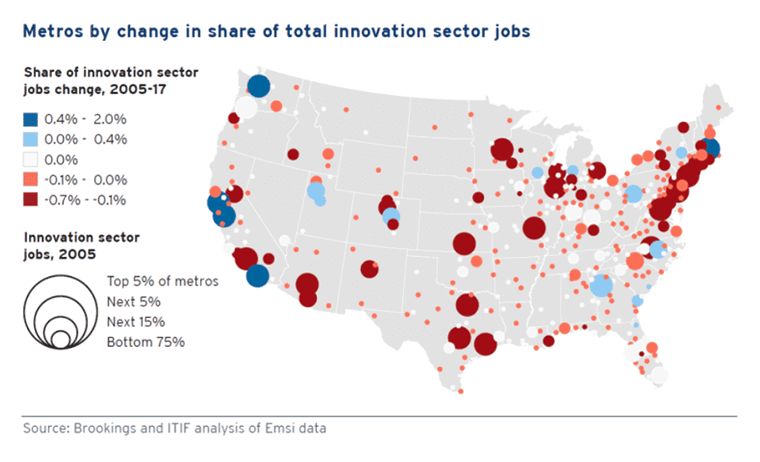 Metros by change in share of total innovation sector jobs

Senior Fellow Mark Muro has recently made the case for regional technology hubs as important potential drivers of growth, opportunity, and inclusion for underrepresented people and places. Muro argues that creating a network of regional tech hubs across the nation represents not just an economic priority, but one of equity. His work on regional innovation hubs directly informed President Biden’s American Jobs Plan, including a major program to invest in regional clusters initiatives across the country. Furthermore, in August 2021, the U.S. Senate passed major bi-partisan legislation for American competitiveness against rising China, which included $10 billion in funding to establish regional tech hubs to drive growth in regions far from the nation’s coastal “superstar” metros. The legislation seeks to create more globally competitive regional centers and to foster economic, racial, and geographic inclusion—in tech and beyond. A companion bill is now before the House for further action and reconciliation.

Also related, in early 2021 the New Democrat Coalition sent a letter to President Joe Biden, Speaker Nancy Pelosi, and Majority Leader Steny Hoyer urging action on a slate of bold, innovative policies to help end the pandemic and rebuild robust economic growth and opportunity that works for every American. The letter included two congressional bill proposals, one of which was the Innovation Centers Acceleration Act, informed by Muro’s landmark report, “The case for growth centers: How to spread tech innovation across America.”